Time has gone by so quickly, that it will soon be a fortnight since early access as available. So I think its safe to now share my thoughts about the latest expansion.

Note: I won’t been talking about the story, as I don’t want to spoil anything, I just want to talk about the changes that were brought up in the PLLs.

I admit that I was excited about the new expansion. I think it was because I knew what to expect during the early access. As this is the second time I was able to get early access. So I was expecting to run into more issues and then having to have emergency maintenance.

Once I finally got home from work, I was eagerly waiting to log in. I had left my PS4 on rest mode over night and while I went to work to ensure that I didn’t have to wait for the download when I got back. I was also glad that I remembered to log out in Mor Dhona, so I was closer to the MSQs started. I was more interested in getting on with the MSQs that I dove straight into the story.

Since working my way through the story, I found myself pulled into the story. It was really well written. I couldn’t pull myself away from the cut-scenes. As much as I enjoyed exploring all of the places in Stormblood, towards the end, I found myself skipping cut-scenes as I just wanted to get on with things. I know its bad, but at least I am being honest. At least you can re-watch cut-scenes using “The Unending Journey”, which can be found in any inn or it is a indoor piece of furniture. So it doesn’t really matter if you skip.

For those who were following the PLL’s you will have been aware of all the adjustments that were being made before hand, so you could prepare a little more. The biggest change was loosing the TP bar. I personally didn’t see anything wrong with having TP.. at least it was easier to tell the different classes apart by what kind of points they used. Instead, now I have noticed that as a RDM in melee stance mode, it doesn’t use any MP… So, does that mean that Melees can focus more attacking rather than worrying about using their TP so quickly?

Another big adjustment, and its always been the way when it comes to a new expansion, is the change in skills. I know that some classes had more changes than others, RDM only really lost their Role Actions, and 2 AoE skills were added. So RDM mains were lucky. Atm, I am currently levelling up my AST and I am liking the changes. At least we can focus on boosting specific job classes when possible. It will be interesting see how other classes have changed. But I am not in any rush to level up of my classes. Instead I will collect as much materia and clusters as much as possible.

One thing was is majorly different in ShB, is that there will no longer job quests for specific classes while levelling up. Before, each job class has a quest every two levels. Even though we didn’t get any new skills from quests in SB, like we did in HW. This time we will automatically unlock new skills when levelling. Now that doesn’t mean there isn’t any job quests at all. Instead, there Role quests which you don’t have to do each job class. Instead, you only need to do the Role quests once. Well it would be boring if they made us repeat it for all of our job classes. 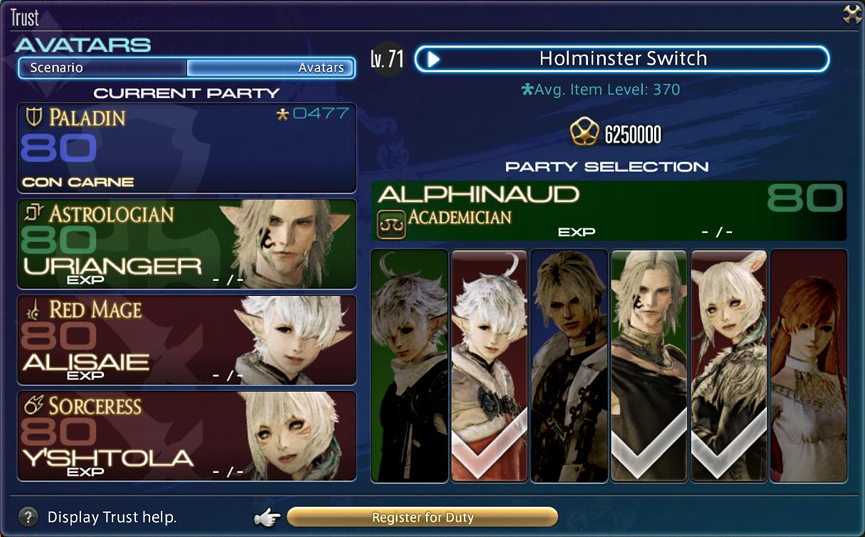 There were a few new features that were introduced. I can’t really go into detail about one of the features, as I haven’t even tried it yet, is the trust system. I am saving that for when I am levelling up my Tanks.

One feature I was so happy that was increased this expansion was the Glamour dresser. Although I was able to fill up pretty quickly, I am soooo glad they double the limit of item stored. At least I was able to free up a retainer a little before levelling up. Now that retainer seems to be storage for the levelling gear that I am able to collect over time.

Shared Fates is another new feature that has been added to ShB. I really do like how you are given more of an incentive to do fates. I wish they had done so sooner. Its also an easier way to get riding maps for the area’s as you need to complete 6 fates to Rank up and unlock them. Although the next step might take a while. It is fun to do and its the perfect way to get more XP when levelling. The only trouble is finding the right chain of fates to get the achievements. But I will get there eventually.

For ShB, they have introduced 6 areas for us to explore, etc. I really do like the design of each area. They don’t feel as big as those in SB, but some SB are massive and it takes ages to find Mobs because you are constantly flying around and its feels like it takes forever! Especially the Ruby Sea as the two Aether Crystals are in the north, North East part of the map… I am glad ShB areas are a little smaller.

I won’t go into detail about each area, but I do like the feel of each area, Il Mheg is probably my favourite area of all, with The Rak’tika Greatwood and lakeland coming next. Il Mheg and Lakeland are very vibrant in colour and are probably the best places to take pictures. I am sure I will be posting pictures on my twitter account in both locations.

Levelling with ShB doesn’t seem like a big problem at the moment. There are so many ways to get a decent amount if xp. Be it FATES, side quests, Dungeon runs and Duty Roulettes, you can be sure you will level up in no time. Just last night, I went up levels pretty quickly after doing Roulettes, with healer in need, and one Dungeon run that is my currently level dungeon. I was able to level up before logging off. So that made me happy.

I think the only downside to ShB, is there are leves for DoW and DoM… There are Leves for crafting and gathering, as they need them a lot to help level up. Although I didn’t really use leves much during levelling in SB, I guess thats why we don’t have them in ShB. There just didn’t seem to help level the character up.

I really do hope other players are enjoying ShB as much as I am. It definitely feels like the best expansion we have seen with HW coming in close second. I know there has only been 3 expansions, but I am sorry SB, but you felt a little draggy and wasn’t really that interesting or gave us much back story of the characters we have already met.

Well I am going to stop there before I start spoiling things for people.

This site uses Akismet to reduce spam. Learn how your comment data is processed.